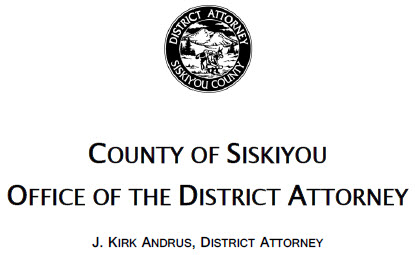 YREKA – On March 20, 2015, Aaron A. Powless, 40, of Klamath Falls, Oregon was sentenced for a felony violation of Health and Safety Code section 25189.5(c), Unlawful Transport of Hazardous Waste. He had previously pled guilty to the charge on December 2, 2014.

In 2007, Powless was informed by the Oregon Department of Environmental Quality (DEQ) that he must properly dispose of a large amount of hazardous materials and waste he had taken control of in 2006. By then they had been stored in his warehouse, from which he ran a roofing business in Klamath Falls, Oregon. Rather than comply, Powless loaded 29,000 pounds of hazardous waste into two of his large tractor trailers. The hazardous waste included numerous materials, among them flammable liquids and solids, acids, peroxides, oxidizers, and alkalis. These were mostly stored in containers of five gallons or less. Without any permits or licenses to transport hazardous materials or waste, Powless moved the hazardous waste across state lines into Tulelake, California. The hazardous waste then remained in the tractor trailers on Main Street in Tulelake for over a year before being discovered.

Government officials visited the site in September, 2008 with Mr. Powless. There they were shocked to find flammable and explosive materials loaded haphazardly onto the trucks with no separation of incompatible wastes. Some had leaked from their containers. Testing later confirmed that tons of these chemicals had been comingled.

The City of Tulelake immediately evacuated the nearest residence, cordoned off the site, and initiated a patrol around the clock until the waste was removed. The next day the City Council declared a local emergency due to the “immediate and significant threat to the children and the citizens of the community.” The site was quickly cleaned by specially trained and licensed contractors, at taxpayer expense.

Siskiyou County Superior Court Judge Karen Dixon told the defendant that he made a huge mistake by cutting corners in managing his business, the result of which created a serious health risk to residents residing and working near the unlawfully stored hazardous wastes. Dixon  sentenced the defendant to five years of probation and 90 days in the County Jail. As conditions of probation, Judge Dixon ordered Powless is to pay the maximum fine available of $100,000.00 to Siskiyou County. Also as conditions of probation, Powless was ordered to pay a civil penalty of $28,400.00 that he had previously agreed to pay in 2011 as part of a settlement with the Oregon DEQ for related violations that occurred in Oregon. The Oregon civil penalty included paying a fine to Oregon DEQ in the amount of $5,680.00, and the completion of a Supplemental Environmental Project. This case benefitted from investigation by the Office of Criminal Investigations, California Department of Toxic Substances Control (DTSC), with assistance from the Siskiyou County Environmental Health Division, and the U.S. Environmental Protection Agency, Criminal Investigations Division, and the Tulelake Police Department. The Office of Criminal Investigations is a special investigation unit within DTSC consisting of peace officers, scientists, and a computer forensic specialist who investigate criminal misconduct and other serious violations of hazardous waste laws in California. It is the only criminal investigation unit within the California Environmental Protection Agency.

“The partnership with the District Attorney’s Office and other agencies was the key to stopping this reckless conduct,” said Reed Sato, Chief Counsel, California Department of Toxic Substances Control. “Mismanagement of hazardous wastes is a real threat to the community and the prosecution by the District Attorney shows that such conduct will be punished appropriately.”

According to District Attorney Kirk Andrus cases stemming from environmental hazards are not often prosecuted in criminal court. “They are sometimes more conducive to civil sanctions, as the large dollar amounts here suggest. However, we felt that this conduct was highly dangerous and egregious, and required a criminal sanction.” Andrus commended Deputy District Attorney Martha Aker for her dogged pursuit of justice in the case, which had been pending since 2011. “We are very fortunate to have a local prosecutor of her background and intelligence who can take on such a specialized case and perform at such a high level. This is an outstanding result, and coupled with the fact that nobody was hurt by Powless’ terribly dangerous actions, brings the case to a successful close.”