SACRAMENTO – Furthering California’s effort to clean up thousands of properties contaminated with lead from the Exide Technologies battery recycling facility, the California Department of Toxic Substances Control (DTSC) today launched an interactive mapping system that details lead contamination levels in the neighborhoods near the facility.

“We tested 8,500 properties for lead, shared those test results with residents, and now have interactive maps publicly available to show where we found contaminated soil,” said DTSC Director Barbara A. Lee. “These maps clearly illustrate the level of lead contamination that is near the Exide facility. We will now use this data to address and clean those parcels with the highest levels of contamination.”

DTSC created the maps using test results from tens of thousands of soil samples collected within 1.7 miles of the Exide facility. The interactive maps show the level of contamination identified in the soil samples from approximately 8,500 properties. Some of the highlights from this data include:

In addition to posting the maps, DTSC is releasing hundreds of thousands of pages of data, including tens of thousands of test results and geospatial information, for about 8,500 parcels sampled.

The state is holding Exide accountable for this contamination and, under a court order, the company must deliver a plan by May 2019 for cleaning the lead in the surrounding community. Meanwhile, the state is moving forward with a cleanup plan to remove lead contamination from the 2,500 properties with the greatest lead levels, based on the soil sampling test results. DTSC will hire an experienced and qualified team to clean the lead contamination and, ultimately, Exide will have to pay for this cleanup work.

The Exide clean-up effort is the largest of its kind in California history.

DTSC has hosted or participated in more than 200 resident-focused meetings and mailed notifications of test results to every owner and resident of a sampled property as part of DTSC’s commitment to openly and transparently communicate information about the process to the surrounding community. DTSC will also hold five more information sessions this month where the public can ask questions about test results and the clean-up effort. 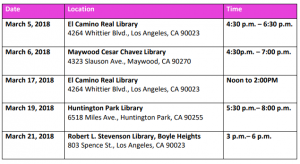 In 2016, Governor Brown signed legislation directing $176.6 million to expedite the sampling of approximately 10,000 residential and other sensitive land-use properties within roughly 1.7 miles of the former Exide facility in Vernon, and to clean up as many as 2,500 properties with the highest levels of lead in soil and greatest risk of exposure. DTSC is the lead agency implementing this cleanup.

DTSC is committed to cleaning up residential properties, schools, parks, daycare centers, and child care facilities with the highest levels of lead in soil and greatest risk of exposure. The Department’s top priority is protecting the health and safety of people in this community, especially the youngest and most vulnerable.

This cleanup is the largest of its kind undertaken in California; it demonstrates the Administration’s strong commitment to protecting the health of people who live in those communities.