SACRAMENTO – This week, the Department of Toxic Substances Control (DTSC) is overseeing the demolition of a former metal-plating facility in Los Angeles, a key step that will transform the 1/4-acre site into a vibrant community park. 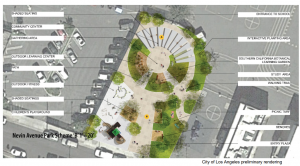 The City of Los Angeles purchased the property in 2017. Under the agreement, DTSC collaborated with the City to outline the specific tasks required of the City to convert the property to the proposed park, including a health and safety plan, a soil management plan, and dust
control.

“The creation of Nevin Avenue Park is the result of DTSC’s partnership with the City of Los Angeles to protect public health and restore neighborhoods to support environmental justice in communities,” said DTSC Director Barbara A. Lee.

Features for the proposed Nevin Avenue Park, located on East 32nd Street near Nevin Avenue Elementary School, remain under review by the City. The City is working on a final conceptual design to present to the community. The target date for the park’s completion is December 2019.

From 1955 through the mid-1980s, the former Renu Plating Company, Inc., operated at two separate buildings, one of which was demolished in 2009. Operations consisted of metal plating, which were discontinued in 1984. Soil investigation results identified volatile organic compounds
such as tetrachloroethene and trichloroethene, and metals such as cadmium, copper, lead, and nickel at the site.

The planned construction activities, under DTSC’s oversight, will allow for the property to be used as a park. The top two feet of soil will be removed and soil samples will be collected and analyzed prior to backfilling with clean soil. These tasks are necessary to prepare the property for construction of the proposed park and protect public health and the environment both during and after construction.

The City’s Department of Recreation and Parks, and other civic partners, will manage the demolition of the building remaining at the property of the former Renu Plating Company, Inc.

Demolition and related work began Wednesday, June 13, and will last about five days. It will have minimal impact on the surrounding community and Nevin Avenue Elementary School. Crews will also use dust-control measures compliant with the South Coast Air Quality Management District requirements to ensure that the community is protected from any harmful dust and debris.