Since the 1980s, the population of the Bay Checkerspot Butterfly, a species native to the San Francisco Bay Area, has been in a serious decline.  As a result, it has been recognized as a federally threatened species.

But the butterfly will soon get help from the Department of Toxic Substances Control (DTSC) and the Santa Clara Valley Open Space Authority.  A piece of land in the Coyote Ridge region in Santa Clara County will soon be designated as a preserve specifically for the butterfly.

Referred to as the ‘Buffer Zone’, the parcel of land is in the western part of the United Technologies Corporation – Pratt Whitney Rocketdyne (UTC) facility in the Santa Clara County foothills, 14 miles southeast of San Jose. UTC previously developed, manufactured and tested solid rocket motors for a variety of space exploration and defense purposes on the land until it ceased operation in 2004. UTC is now decommissioning its facilities and equipment and cleaning up soil and groundwater at its 3,300-acre facility.

DTSC is overseeing the post-closure of three former hazardous waste storage and treatment units that collected wastewaters containing solvents and ammonium perchlorate. These units have been excavated and replaced with clean soil and a cap, and DTSC is currently monitoring the groundwater. The remaining portion of the UTC site is undergoing cleanup under the oversight of the San Francisco Bay Regional Water Quality Control Board which consists of monitoring groundwater extraction wells, soil vapor extraction and the soil remediation using composting.

In May 2015, DTSC reached out to the community requesting public comments for the permit modification to transfer the Buffer Zone to the Santa Clara Valley Open Space Authority to be maintained as a butterfly preserve. Under the modified permit, UTC will give the piece of land to the Open Space Authority.

The Buffer Zone, an unused area of the site, is comprised of several steep canyons that contain essential habitat for the endangered butterfly. Grasslands in the Buffer Zone are critical to the survival of the butterfly because they support its host plant, the dwarf plantain.

Rural development in the Bay area has eliminated most of the grasslands and only about 12,000 acres remain. The butterfly is now isolated to just four or five small populations in San Mateo and Santa Clara counties. 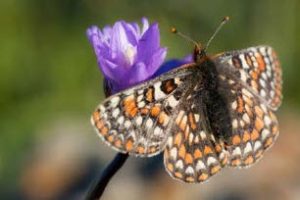 “While protection of the [butterfly] is critically important, the conservation value of this land extends well beyond a single species,” said a spokesperson for the Santa Clara Valley Open Space Authority. “This project offers multiple benefits and has potential to protect habitat for rare, threatened and endangered plants and animals.”

The spokesperson added that the Buffer Zone encompasses nearly a fifth of the remaining undeveloped grassland habitat in Santa Clara County and is considered vital to the recovery of the butterfly and other species including the Metcalf Canyon Jewelflower.

Along with eight ponds and numerous seeps and springs, the grasslands provide habitat for 13 species that are considered rare, threatened or endangered.

“The property is especially important for its contribution to the critical landscape linkage between the Santa Cruz Mountains and the Diablo Range through the adjacent Coyote Valley,” said the spokesperson.  “Its protection would ameliorate the effects of climate change by providing connectivity to wide range of microclimates and environmental gradients that provide ecological resilience.”

The Buffer Zone would also help secure vital landscape between the Diablo Range and Santa Cruz Mountains and provide opportunities for public recreation and environmental education, added the spokesperson.