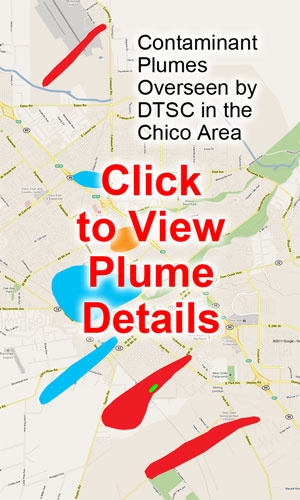 Chico residents have won back a key element of their quality of life in Northern California – the confidence to again take their drinking water for granted.

DTSC helped renew that confidence after groundwater contamination in the 1980s shut down wells, triggered scores of investigations and disrupted the sole source of drinking water in the Butte County college town of 88,000.

“As long as they turn on the tap and it’s safe, clean water we don’t really hear much about it (contamination) from our customers now,” said Mike Pembroke, Chico district manager of California Water Service (CWS).

DTSC and its partners have restored calm in Chico by steering a dangerous chemical used in dry-cleaning operations away from city wells and beginning a cleanup.

Chico’s water crisis surfaced in 1984 when CWS discovered a toxic colorless dry-cleaning fluid called perchloroethylene (PCE) in the city’s groundwater. Like water suppliers across California at the time, CWS was complying with a new state water quality law. It required that public wells be sampled for industrial solvents commonly used in manufacturing and commerce.

State follow-up investigations to the CWS discovery determined that several Chico dry-cleaning operations had routinely disposed of PCE in city sewers. Leaking sewers made a bad situation worse, steering hundreds of gallons of poisonous PCE into the underground water supply.

In subsequent years Chico residents would learn of eight contamination plumes beneath their homes and businesses, the largest floating below much of downtown Chico. PCE concentrations below downtown soared at one point to 2,900 parts per billion, nearly 600 times above the legal limit for safe drinking water. Cancer scares and trauma abounded as officials initially shut down 18 drinking water wells.

In hindsight, Chico’s ordeal represents a harsh, costly lesson in poor disposal of chemicals – and an argument for safer chemicals in commonly used products.

But it especially spotlights the scientific, technical and legal complexities of restoring one city’s priceless natural resource. Containing the damage and preventing human exposure to toxic groundwater cost Chico taxpayers, insurance companies and businesses millions of dollars for new wells, pipes, air stripping and carbon filter water treatment systems and bottled water. The second phase now under way – cleaning up and eliminating the PCE – may prove equally expensive and time-consuming.

Quietly, throughout the city, DTSC’s work of nearly three decades continues. But even as confidence in the water is back, Chico is a lesson worth remembering.

View the video from YouTube
(opens in new window)