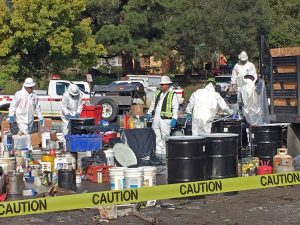 DTSC assists local, state, and federal agencies after major disasters, including wildfires and flooding, to remove household hazardous waste and other harmful substances, such as e-waste found on parcels and properties.

The contaminated debris is cleaned up and contained as quickly as possible to minimize exposure to emergency personnel, the public, the environment, and workers involved in restoration efforts.

E-waste can include cathode ray tubes (CRTs) from televisions, computers, and other electronic devices.

For the first time since the mid-1990s, DTSC assisted with the cleanup and removal of household hazardous waste and e-waste following a major flood event. DTSC partnered with Sonoma County to remove HHW following the Russian River flooding in February 2019, which impacted about 2,500 properties, including homes and businesses. DTSC worked alongside county workers and conducted curbside pickups of HHW and e-waste.

DTSC completed work for this response in March 2019. 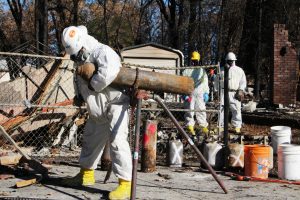 DTSC, with the assistance of the U.S. Environmental Protection Agency (EPA) and other local, state, and federal agencies, began to assess and remove household hazardous waste from fire-damaged properties as part of the interagency response to the Camp Fire in Butte County and the Town of Paradise (Northern California) and the Woolsey and Hill Fires in Los Angeles and Ventura Counties (Southern California) last December.

DTSC’s Public Dashboard mapping system provides critical information to crews on the ground. In addition, it displays the latest information regarding DTSC’s cleanup process to keep the public informed. In 2017, DTSC launched a mapping tool that is designed both for emergency crews and public use. The data input by crews on the ground streamlines DTSC’s cleanup of household hazardous waste and keeps the public updated after each day.

Camp Fire Response, Butte County and the Town of Paradise

An unrelenting series of wildfires have continued to devastate portions of our State. View the video below to find out more about the work DTSC does after a major wildfire.

Camp Fire, The New York Times: In California, Houses Burned. So Did the Toxic Chemicals They Contained.

In the charred footprint of each home in Paradise lurks an invisible and dangerous legacy of the Camp Fire: toxic chemicals released by the blaze. There may be radioactive isotopes from burned-up antique crockware, cupboards of incinerated household cleaners, and asbestos from old siding. Heavy metals, chemicals and biological contaminants left behind demand a cleanup of extraordinary scale, before any permanent return to Paradise is safe, according to the department.

Officials say they hope to finish the operation within 9-12 months, an aggressive target that will comprise hundreds of workers and coordination between the state Department of Toxic Substances Control, United States Environmental Protection Agency and Butte County Environmental Health.