Content on DTSC’s Website Archive is no longer being updated. It is being provided for informational purposes only and may be out of date, contain technical inaccuracies, typographical errors or broken links. This content is not promised or guaranteed to be correct, current or complete. DTSC assumes no responsibility (and expressly disclaims responsibility) for updating this site. Any reliance on the content contained herein is at the user’s own risk. Users are solely responsible for confirming the accuracy and completeness of all posted information before citing or using the information. By accessing this site, users agree that DTSC shall not be held liable for any claim, loss or damages which may result from the use of, access to, or inability to use the content contained herein.

Lead wheel weights are defined by the new law, California Health and Safety Code Sections 25215.6-25215.7, as any weights containing more than 0.1 percent lead. The law took effect Jan. 1, 2010, and applies whether a weight is installed on a new vehicle or is removed and reinstalled during wheel balancing. Vehicles manufactured on or after Jan. 1, 2010, and sold in California must have lead-free weights, and vehicles manufactured in 2009 or before must switch to lead-free weights whenever the tires are changed or rebalanced.

Lead has been used in wheel weights since the 1930s, but it can be highly toxic and has been linked to a wide variety of health hazards throughout all systems of the body. These effects include neurological and behavior problems, especially in children.

California banned the sale, manufacture and installation of lead wheel weights to help keep lead from leaching into water supplies and other parts of the environment.

Passing traffic often grinds the lead into particles that contaminate the air and the surrounding area. High levels of lead are typically found along urban roadways and in runoff from parking lots. In California alone, the U.S. EPA (link removed – destination no longer available) estimates that half a million pounds of lead are released into the environment each year as a result of wheel weights falling off cars and trucks. 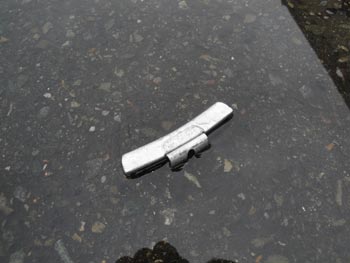 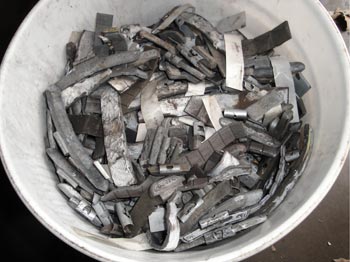 Want to know about lead wheel weights? Want to find out the environmental impact? Watch the video.

Environmental and health concerns associated with lead pollution prompted the industry to develop alternatives to lead wheel weights. “There are a number of different products on the market,” said André Algazi, supervisor of the California Department of Toxic Substances Control’s Consumer Products unit, within DTSC’s Office of Pollution Prevention and Green Technology.

“There are some that are different alloys of different metals. Copper and zinc are used in some of them, tungsten, and there are some plastic wheel weights available, so there are things on the market.”

The most popular alternative to lead wheel weights is steel.

Perfect Equipment Inc., a leading manufacturer of wheel weights, was advertising (link removed – destination no longer available) its lead-free steel and zinc weights in 2005, after the European Commission issued a directive (link removed – destination no longer available) prohibiting the use of lead in vehicles. That company and two other major players in the wheel weight industry — Plombco and Hennessy Industries — agreed in 2008 to stop shipping lead wheel weights to California, as part of a legal settlement with the nonprofit Center for Environmental Health. The companies now offer lead-free alternatives. Hennessy (link removed – destination no longer available) and Plombco have even set up special websites (at www.steelwheelweights.com and www.zincwheelweights.com, respectively) to promote their lead-free weights.

Algazi said the DTSC website links to information about lead alternatives, as well. DTSC is the implementing agency for the new state law and is working to educate the affected industries.

Many tire and wheel stores were prepared for the change by the time the new law was put in place. Auto industry publications had been reporting on lead wheel weight legislation and trends for some time.

“As far as Goodyear’s process, we were ahead of the game,” said Kevin Boyd, assistant store manager at a Goodyear Tire Center in Sacramento. His shop started installing steel pound-on, clip-on and stick-on weights even before the law took effect. “I think it’s good for the environment,” he said. “I mean, I have five small children, and it’s something I want to protect for them in the future.” His suppliers were ready for the change, as well. “We had our weights in process,” Boyd said, “and we just started to exchange them out. … We just substituted with the steel weights right away.”

Leonard Orrick, owner of Radial Tire Service in Sacramento, said his shop removes 10 to 20 pounds of lead weights a day and has switched to steel weights, as well. Notifying his suppliers about the law and restocking the shop’s inventory went smoothly, but installing the new steel weights has involved a bit of a learning curve.

“You get in a rote when you knew which lead weight went on which wheel, and it’s just going to be a training period to get to know which steel weight to go on which type of lip on the wheel,” he said. Additionally, his staff is finding that the steel weights don’t bond to the wheels as easily as the lead weights do. “We’re having a difficult time with them coming off after the wheel flexes,” he said. “We’re having probably 2 percent of cars come back with vibration problems.”

Boyd, at Goodyear, said he hasn’t seen any difference in the performance of lead-free weights compared with lead weights, other than a surface-preparation problem he’s encountered with stick-on weights in general. “You have to make sure [the wheel] is absolutely 100 percent clean, with no debris, almost down to bare metal before [the weight] will adhere onto the wheel,” he said.

If the wheel is extremely dirty, he said, the cleaning process involves abrasion, such as a scuff pad. “After that, we use a cleaning compound or chemical along with a rag to wipe the wheel down to get it to the purest condition we can.” Boyd believes that steel weights, once properly installed, will have a longer life expectancy than lead weights.

“All the steel weights have protective coating. Prior, with the lead weights, you had the standard lead weight or the protective coated weight, so it wouldn’t etch into the aluminum wheel, oxidize into the wheel,” he said. “With the coated steel weights, I think they’re actually going to have a longer life span on them, and I don’t foresee any problems whatsoever with them.” 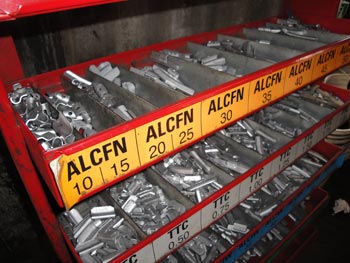 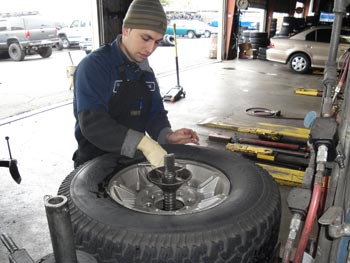 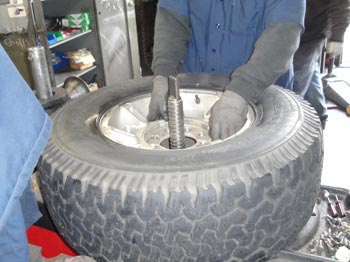 Both Boyd and Orrick said they expected to see lead wheel weights being removed from cars and trucks for some time to come. “Life expectancy of most tires [is] anywhere from 40 to 60 thousand [miles],” Boyd said. “Californians average 15,000 a year, so we expect to see them for at least another four years — probably longer than that.”

The old lead weights must be treated as hazardous waste once they’re removed, or recycled as scrap metal (which is exempt (link removed – destination no longer available) from regulation), but the good news for most wheel installers is that they probably already have a waste hauler who can properly dispose of the lead.

“The best thing to do would be to speak with your hazardous waste contractor, the person that takes the oil filters and the used oil and the antifreeze and the brake pads and maybe the tires,” DTSC’s Algazi said. “That company should be able to help you with your lead wheel weights, as well.” Additionally, some manufacturers, including Plombco and Perfect Industries, offer wheel weight recycling (link removed – destination no longer available) or collection (link removed – destination no longer available)  programs for their distributors.

It doesn’t take a complex system or special containers to store the weights in a shop, but it does help if employees have a designated space to put the weights as soon as they’re removed. Orrick said his employees take the lead weights off and put them in a five-gallon bucket. “When the buckets are full, we accumulate them and put them on a pallet and ship them out of state,” he said.

Orrick has even found that there’s money to be made from the old lead weights. His shop uses a waste service that takes the lead weights to Nevada, where they are purchased for recycling. “They’ll recycle the lead,” he said, “and whatever the costs are, or whatever the lead price is at that time, they’ll reimburse me.”

Boyd said his Goodyear store also collects the old lead weights in five-gallon buckets. The store’s wheel weight supplier hauls them away and disposes of them. “Prior, we would send [the lead waste] to our battery personnel, and they would use it, recycle it into lead for the batteries. Now we have to dispose it through our supplier, and they handle it through the waste disposal management system,” Boyd said.

He said his shop’s employees are conscientious about the need to treat lead weights with special care. They wear rubberized gloves while working on wheels, to protect their hands from lead exposure, as well as injuries. Otherwise, Boyd said, “they would just contact things throughout the whole day and be exposed an entire workday to lead.” The staff also conducts a nightly sweeping and cleanup to ensure that no lead weights leave the shop as litter, where they can break down or make their way to storm drains.

California’s move to use non-lead weights is part of a widening trend based on increasing studies showing the potential for lead contamination. European and Japanese automakers have phased out lead weights, and legislation banning lead wheel weights is pending or has passed in several U.S. states. Local governments and agencies are voluntarily beginning to use alternatives in their vehicles, as well.

Additionally, as partners in the U.S. EPA’s National Lead Free Wheel Weight Initiative (link removed – destination no longer available), many major U.S. automakers (such as Ford, General Motors and Chrysler), retailers (including Wal-Mart and Costco) and government agencies (such as the U.S. Postal Service and the Air Force) are phasing out lead wheel weights within their stocks and vehicle fleets.

For more information about the law, visit DTSC’s Lead Wheel Weights website or contact a regulatory assistance officer at (800) 728-6942.