We provide expertise in analytical and environmental chemistry 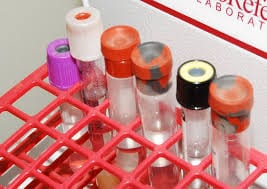 In broad terms, Biomonitoring is the measurement of chemicals or their metabolites in human or animal biospecimens (blood, milk, eggs, fish, etc.).  It is considered an effective strategy to measure contaminants in local wildlife or grazing animals to map the extent of contamination than the traditional soil sampling.

Human Biomonitoring — the measurement of chemicals or their metabolites in a person’s body — can provide an overall measure of human exposure to certain chemicals found in air, water, food, soil, dust, and consumer products.  Biomonitoring helps us track the amounts and types of chemicals that get into people from all sources as it integrates all exposure pathways.  Biomonitoring provides data on temporal, demographic and geographic trends and links to health outcomes.  The data are used to identify chemicals for pollution prevention, regulation or de-regulation and measure the efficacy of California’s chemical regulatory programs, serving as the ultimate performance indicator for regulatory interventions.

Biomonitoring can also identify new, “unknown chemicals” to study and map their fate and transport.  For example, if chemicals are identified in people or wildlife, then look upstream to identify where the chemicals come from and how they move through the environment.  Data are used to look at whether levels in people, wildlife, and the environment are increasing or decreasing.

In the late 1980s, ECL scientists measured Persistent Organic Pollutants (POPs) in grazing animals and fish in the vicinity of industrial facilities (metal smelters and wood treatment plants).  This pioneering work helped map the extent of contamination and helped support Health Advisories to protect residents.  ECL expanded its capabilities to measure additional chemicals in wildlife and human tissues, and has collaborated in numerous epidemiological studies on toxic chemicals.

As part of the California Biomonitoring Program, a collaborative effort among DTSC, the Office of Health Hazard Assessment and the California Department of Public Health, ECL is tasked with measuring several targeted classes of POPs (organochlorine pesticides, PCBs, flame retardants, fluorinated chemicals, ingredients in personal care products, etc.), as well as with identifying new, “unknown” chemicals.

What are Flame Retardants?

Not all flame retardants are toxic, but members of the following classes often are:

Halogenated flame retardants persist in the environment and build up in freshwater, marine, and terrestrial ecosystems globally, with the highest levels in predators such as marine mammals and birds of prey. Exposures to some halogenated flame retardants have been linked to adverse health effects in animals and humans, including endocrine and thyroid disruption, immunotoxicity, reproductive toxicity, cancer, and adverse effects on fetal and child development and neurologic function.  Some organophosphate flame retardants are human carcinogens.

TB 117 was revised because it did not adequately address the flammability performance of upholstery cover fabric and its interactions with underlying filling materials.  The new standard, TB 117-2013, effective January 1, 2015, is intended to improve fire safety and often eliminates the need for flame retardant chemicals. It does not preclude their use, however.

In the late 1990s, ECL scientists were the first to report anomalously high levels of some flame retardants (polybrominated diphenyl ethers, or PBDEs) in the blood and fatty tissues of California women in a study of chemical contaminants as risk factors for breast cancer (Petreas et al, 2003).  While no clear association to breast cancer was found (Hurley et al 2011; Petreas et al 2011), the levels of PBDEs were about thirty times higher than what had been recently reported in European studies.  Parallel to the findings in human tissues, ECL scientists identified an exponential increase in levels of PBDEs in harbor seals from the San Francisco Bay: between the late 1980s and the late 1990s, PBDEs had increased by 100 times in seal blubber (She et al, 2002). These findings were corroborated by other scientists and formed the basis for AB 302 (Chapter 205, Statutes of 2003), which limited the use of some PBDEs in products.

ECL scientists continued their research into flame retardants in developing methodologies to identify and quantify their concentration in various sources and waste streams.  In one study, DTSC identified e-waste as the major repository of PBDEs in waste streams, followed by autoshredder waste and sewage sludge.  The study also warned of waste management practices that could impact the spread of PBDEs in the environment (Petreas and Oros, 2009).

In collaboration with the University of California San Francisco (UCSF), ECL staff measured decreasing levels of PBDEs in the blood of pregnant women recruited three years apart (Zota et al. 2011; 2013).  These findings were consistent with the PBDE phase out following AB 302, and generated media interest.  More recently, PBDE levels in breast milk of California women showed a significant decrease, yet levels are still high and almost 30% of the infants would be exposed above the USEPA RfD (Guo et al. 2015).

The first study (Guo W, Holden A, Crispo-Smith S, Gephart R, Petreas M, Park J-S. (2015): PBDE Levels in Breast Milk Are Decreasing in California, Chemosphere, PMID: 26693645), published in December 2015, was designed to assess the effect of the legislative action that led to the phase out of PBDEs.  The study compared PBDEs in breast milk of California women collected at two different time periods, before and after the phase out.  The first group of 82 women was recruited in 2003-05 and the second group of 66 women in 2009-11.  Overall, PBDEs dropped by 39% between the two time periods.  Despite the decrease, 30% of breastfed infants are still exposed to unacceptably high PBDE levels (above the USEPA RfD).

The second study (Guo W, Garner S, Yen S, Petreas M, Park J-S (2016): Temporal changes of PBDE Levels in California house cats and a link to cat hyperthyroidism. Environ Sci & Technol, 50(3), 1510-1518, 2016, PMID: 26699103) published in January 2016, looked at PBDEs and other persistent chemical contaminants in the blood of house cats.  In collaboration with local veterinarians, DTSC scientists recruited cats from two time periods: 2008-10 and 2012-13.  PBDE levels in the second time period had dropped by half, whereas other chemical contaminants showed no significant changes.  The study also showed that PBDE levels were significantly higher in hyperthyroid cats compared to non-hyperthyroid cats.  PBDEs have been suspected as a cause of hyperthyroidism in cats.

These results show that regulatory interventions have a demonstrable effect on exposures and that biomonitoring studies are a great tool to assess changes.