The secret has spread far beyond the walls of the Department of Toxic Substances Control (DTSC), as many others have also noticed the tremendous work of this pair. Both women have received national recognition for their work in environmental health. They are among 20 Pioneers under 40 in Public Health honored by the Collaborative on Health and the Environment (CHE) (opens new window).

The duo was among 20 Pioneers selected by CHE after a nationwide search in July 2017. CHE, a nonprofit organization dedicated to educating people about environmental impacts on human health and well-being, consulted experts in the field to identify the best young researchers and advocates.

“I’m truly honored and grateful to have been selected for this award, in the company of such amazing young leaders and visionaries who have dedicated their lives to protecting 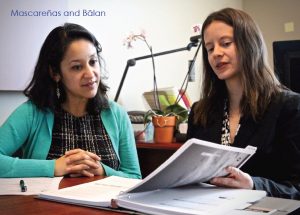 The 20 Pioneers are pairing up for a series of webinars scheduled to run through June 2018. On April 24 Mascareñas and Vanessa Galaviz, a scientist in the California Environmental Protection Agency’s Office of Environmental Health Hazard Assessment, will highlight scientific and policymaking implications of environmental justice and disparities in exposure to hazards in underrepresented communities.

“I’m thrilled that CHE has created a recognition program that allows for young scientists and environmental public health professionals to share their work with a broad audience and spur further collaboration – and I’m thankful to be a part of this important effort,” Mascareñas said.

Mascareñas’ Office of Environmental Justice and Tribal Affairs is a newly formed group in the Department.

“Ana is a strong and compassionate leader,” said DTSC Associate Governmental Program Analyst Lazaro Cardenas, who works in her group. “She is relentless in our work with environmental justice communities and supportive of DTSC staff. Her leadership is a testament to our values of collaboration, accountability, and service.”

Bălan discussed “Chemicals in Consumer Products: Exposure Science at the Forefront of Regulation” in her October webinar.

Bălan’s work directly contributes to implementing California’s landmark SCP regulations, aimed at recucing toxic chemicals in consumer products. She leads DTSC’s team studying hazards associated with perfluoroalkyl and polyfluoroalkyl substances (PFASs). She previously managed international projects on the use of flame retardants and PFASs in consumer products. She received a Ph.D. in environmental science, policy and management from UC Berkeley as well as a bachelor of science in earth and planetary sciences from Jacobs University in Germany.

Prior to joining DTSC, Mascareñas worked in several roles for the Physicians for Social ResponsibilityLos Angeles, and she was a member of the East Los Angeles Residents Association board of directors, among other positions.