The state is developing a program to train residents of communities impacted by the former Exide Technologies facility for jobs in the environmental field.

The California Department of Toxic Substances Control (DTSC) is creating the program so residents can participate in the revitalization of their communities and to gain skills – such as soil sampling and remediation – that could help them get jobs in environmental-related industries, said Ana Mascarenas, assistant director of environmental justice and tribal affairs at DTSC.

About $1.2 million from a $176.6 million spending bill signed by Gov. Brown in April is funding the ambitious program. The bill provides money for sampling and cleaning up properties within 1.7 miles of Exide.

DTSC has sampled almost 2,000 properties in communities near the former battery-recycling facility – and the pace will accelerate as the department works to test the remaining 8,000 properties by July 2017.

“This workforce-training program is a first of its kind for DTSC,” Mascarenas said. “It is a way for the local community to benefit from and be part of restorative justice.” 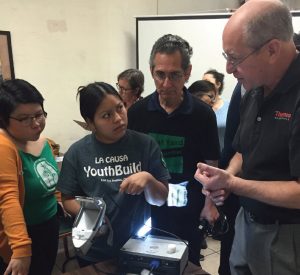 community and ensures past mistakes are not repeated.

DTSC’s program will be modeled after the U.S. Environmental Protection Agency’s Brownfields Workforce Development and Job Training program. EPA has funded the program in many states, including California.

While the program structure is still evolving, a pilot project has already taken place. About 20 young people, eager to serve their communities, spent two Friday mornings in February to train in the use of handheld X-ray fluorescence technology (XRF). The analytical technique is used to determine the presence of lead and other metals in soil. 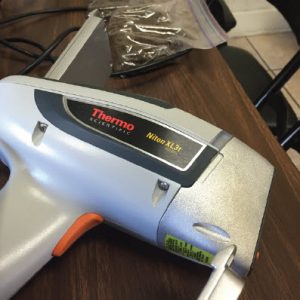 Many universities use the devices in their classrooms, so the students in Commerce already have an edge. “Lessons learned through this tool are really quite varied and great,” he said. “They learn about chemistry, statistics, analytical instrumentation and even physics. Physics is the interaction of X-ray energy and matter – and that is the basis of this technology.”