Two decades later it’s hard to overstate the fears for California’s future that accompanied four rounds of US military base closings from 1988 through 1995. More than 30 bustling facilities that generated thousands of jobs and pumped billions of dollars into the state’s economy suddenly went silent. One of every four bases shut down by the military were in California, leading to profound impacts on communities throughout the state. 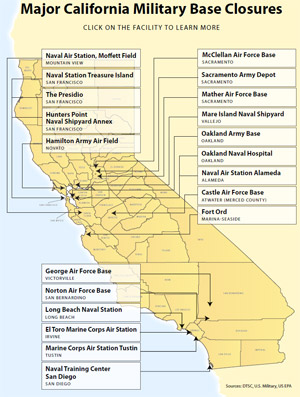 “It was catastrophic. Many likened it to a natural disaster,” recalled Michael Houlemard, executive officer of the Fort Ord Reuse Authority (FORA). The Authority is repositioning Monterey County’s 28,000-acre Fort Ord for new uses.

In 1994, Governor Pete Wilson predicted that California would eventually see such progress.

In a speech reported by the Los Angeles Times at the height of California’s base closure crisis, the former governor said the state had one option: to view the closures as an opportunity.

“We have potential to convert these bases, which represent some of the prime real estate in North America, into the kind of civilian job generators which they can be,” Wilson said.

Many local communities had hoped for more development and jobs by now. But two severe recessions have slowed construction and continue to delay ambitious rebuilding plans.

In the meantime, environmental restoration continues, setting new stages for longer-term economic development throughout California. Cleanups overseen by the Department of Toxic Substances Control (DTSC) with the U.S. Environmental Protection Agency (USEPA), and largely conducted by the U.S. Department of Defense (DOD) have already restored 113,000 acres – 70 percent of the total.

“By 2018 it will be 80 percent done,” said Dan Ward, a Sacramento-based branch chief for DTSC’s Brownfields and Environmental Restoration Program.

“The challenge was immense. The largest bases sprawled over thousands of acres, and had industrial facilities, airfields, ports and landfills that impacted the environment. Old munitions ranges with unexploded ordinance just beneath the surface posed an especially serious safety threat,” said John Scandura, a Cypress-based branch chief for DTSC’s Brownfields and Environmental Restoration Program.   “All this contamination had to be remediated to safe levels before the military property could be transferred for redevelopment.”

Four rounds of base closures quickly propelled military cleanups from a relatively minor component of DTSC to a top priority. Accelerated cleanups fueled an expansion of DTSC’s cleanup program, as the department stepped into the lead role  for coordinating all state agencies involved in military remediation.  DTSC’s work with the military, state and local agencies, USEPA, and other stakeholders spurred timely, innovative cleanups that protected human health and environment.

Two decades of cleanups also created stronger and more efficient working relationships between DTSC and the military, said FORA’s Houlemard. He said early years tended toward conflict as the two adjusted to one another’s expectations.

“They’re a good partner to work with,” said DTSC’s Ward. “We have our differences. But things have improved monumentally since the beginning.”

“The work steadily continues even as the economy is tough,” said Ward. “We’re positioning these sites for future uses and a new generation of jobs.”