We all know it instinctively. There’s no place like home.

And for thousands of residents of areas decimated by the Northern California fires in the fall of 2017, the Department of Toxic Substances Control’s efforts have ensured a swifter return to their properties, enabling them to rebuild their homes, neighborhoods, and lives.

DTSC’s Emergency Response Program crews are well on the way to meeting the goal of finishing cleanup of the 802 affected properties in areas DTSC served. DTSC is responsible for removing household hazardous waste from each property, including lead-acid and household batteries, compressed gas cylinders, fertilizers, paints, pool chemicals, and aerosol cans. DTSC crews also remove asbestos, which can be found in some siding, pipes, roofing, and floor tiles.

This initial step is vital to make the areas safe for further debris removal and, eventually, for residents to return. The debris removal phase is expected to be complete early in 2018. 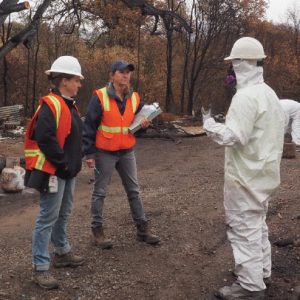 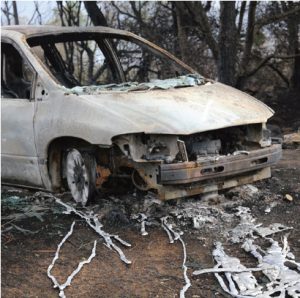 “DTSC’s Emergency Response personnel have responded to wildfires in the past, but the October wildfires were the department’s biggest response to date,” DTSC Director Barbara A. Lee said.

The series of wildfires that began October 9 prompted Gov. Jerry Brown to declare a State PREVIOUS of Emergency o 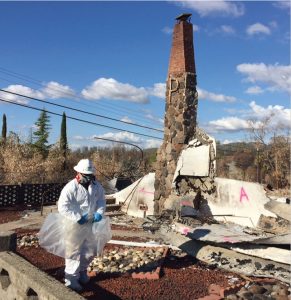 n October 10, followed the next day by a federal disaster declaration.

Because of the size and scope of the cleanup, DTSC focused on Nevada, Yuba, Butte, Lake, and Mendocino counties, while the U.S. Environmental Protection Agency concentrated on Napa and Sonoma.

Director Lee visited Mendocino County recovery efforts and praised DTSC’s work there, saying “Our Emergency Response Program crews are helping the fire victims to recover and rebuild.” DTSC ERP staff were continuously in the field for six weeks, assessing more than 800 properties and 1,000 structures. More than 200,000 pounds of household hazardous waste and asbestos were safely removed from properties and taken to permitted hazardous waste facilities to prevent further exposure to emergency personnel, the public, and the environment.

Removing this HHW and asbestos is a critical first step in restoring fire-damaged properties. After DTSC safely removes household hazardous waste, CalRecycle (the state’s Department of Resources Recycling and Recovery) can safely remove the rest of the debris. The soil is tested so the land can be returned to the owners in the same condition as it was before the fire. That will allow residents to return and begin the process of rebuilding the place they call home. 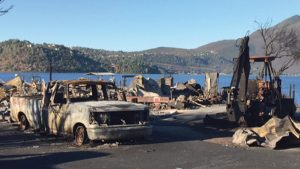 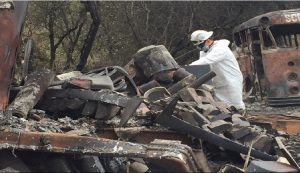