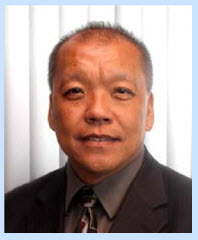 He is enjoying his new position.

Pang, who was appointed to the position by California Governor Edmund G. Brown Jr., joins OCI at a time of transition. The unit was moved from DTSC’s Office of Legal Affairs to its Hazardous Waste Management Program on  July 1, 2015. Elise Rothschild, Deputy Director of DTSC’s Hazardous Waste Program, said she doesn’t anticipate changes in staff alignment.

“I am excited to have Hansen on board as well as the OCI Chief Investigator position filled after the long-time vacancy,” Rothschild said. “I look forward to working with Hansen to further the great investigative and enforcement work this unit does.”

Pang has investigated environmental crimes with air, soil or water violations, among other duties, as an investigator for the San Francisco District Attorney’s Office since 2012. Prior to that Pang was an inspector for the Alameda County District Attorney’s Office (1994-2012) and a police officer for the University of California Police Department at Berkeley (1981-94). During his final 14 years with the Alameda County DA’s Office, Pang was involved in investigating environmental crimes.

“Both the Alameda and San Francisco offices understood that environmental crimes are complex and that one person couldn’t do it all,” Pang said. “They allowed me to assist and learn from other DA offices, as well as state and federal agencies outside of our jurisdiction. I was fortunate and able to go to other counties and learn from various investigators and scientists.”

Pang has worked closely with DTSC investigators for many years and he has learned a lot from them.

“I have worked with a great bunch of people from DTSC,” said Pang, who now has an office at headquarters in Sacramento as well as in Berkeley. “They trained me on a variety of things such as sampling and conducing hazardous waste undercover stings. We helped eachother on numerous surveillance, search and arrest warrants. Whenever I needed assistance on sampling, they were always a phone call away. The DTSC lab in Berkeley has been my savior for the past 16 years when I was both at Alameda and with the San Francisco DA’s office.”

Pang is currently the Treasurer for the Northern California Asian Peace Officers Association and is a member of the California Hazardous Materials Investigator’s Association, an organization for which he has served as vice president and Bay Area director.

“We conducted extensive outreach to find a candidate to oversee this critical part of our enforcement efforts,” Ingenito said. 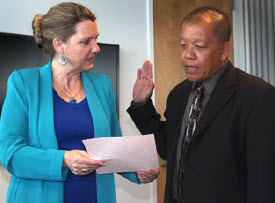 OCI has four investigator positions that Pang is looking to fill and he has many ideas for his new position. But he also enjoys his spare time and he likes to spend it with his family.

“My wife Marilyn and I have been together over 30 years and I enjoy the quiet time when we are walking our dogs,” Pang said. “Our daughter Allison is a runner like me and I have enjoyed the time running with her at Bay to Breakers and other events. My son, Ian, loves basketball and video games, although now he can beat me at both.”