Content on DTSC’s Website Archive is no longer being updated. It is being provided for informational purposes only and may be out of date, contain technical inaccuracies, typographical errors or broken links. This content is not promised or guaranteed to be correct, current or complete. DTSC assumes no responsibility (and expressly disclaims responsibility) for updating this site. Any reliance on the content contained herein is at the user’s own risk. Users are solely responsible for confirming the accuracy and completeness of all posted information before citing or using the information. By accessing this site, users agree that DTSC shall not be held liable for any claim, loss or damages which may result from the use of, access to, or inability to use the content contained herein.

Results promising for “in situ” bioremediation 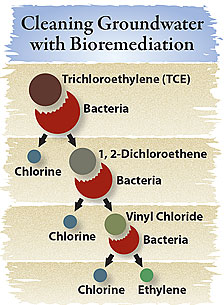 It sounds almost comical – pouring molasses, vegetable oils, even cheese whey into contaminated groundwater to remove one of the nation’s most prevalent and toxic pollutants.

Yet it works. An emerging science that works with nature to destroy toxic chemicals is increasingly providing the remedy for groundwater cleanups throughout California. Food material poured into groundwater stimulates growth of bacterial microorganisms that eat the food (molasses, oils and whey), then keep eating until the contaminant is gone.

Typically, the contaminant is trichloroethylene (TCE), an industrial metal degreaser and cancer-causing chemical that seeped into groundwater throughout California after decades of often-careless handling.

Cleanup experts say a decade of improved science increasingly makes “in situ” (in place) bioremediation more effective, cheaper and faster than pumping contaminated water above ground to filter and treat. Often, the newer method reduces the groundwater cleanup timeline from years to months, they say.

“Historically, in cleanups, the performance measure was how much (contaminated water) we pump and treat,” says Charles Ridenour, a DTSC supervising hazardous substances engineer. That was expensive, required lots of energy and generated emissions from heavy equipment. It also created new toxic waste, as carbon filters trapped the contaminants above ground and then required disposal.

“All the new remedies are ‘in situ’ bioremediation,” Ridenour said.

A 2006 DTSC report cited at least 50 California groundwater cleanups using emerging “in situ” methods to decontaminate groundwater. The number is much higher today.

Typically, an “in situ” remedy for TCE and other chlorinated solvents has four steps, each stripping one chlorine molecule from the parent molecule. TCE degrades to cis-1,2-dichloroethene and then to a more toxic vinyl chloride. Finally, it converts to ethylene, a gas which is relatively short lived and degrades to carbon dioxide and water.

The method isn’t always successful. Reactions can stall at any step and require regular monitoring. But as the science improves, and experts learn more in the field, DTSC is encouraged.

“It’s working its way to becoming a more natural way of addressing cleanups than the past,” adds Barbara Cook, branch chief in DTSC’s Brownfields and Environmental Restoration Program.