Creating a community asset: Turning a Brownfield into a sports park

The Department oversaw the cleanup and transformation of a vacant and contaminated former railroad maintenance yard on Rumrill Boulevard in San Pablo into badly needed open space and soccer fields.

The 4.5-acre park consists of three youth soccer fields, a practice field, a picnic area, tot lot, vendor kiosks and 62 parking spaces. The park also is a key component of an ambitious plan to revitalize the area along Rumrill Boulevard. A state grant and tax credits provided much of the funding for the park.

San Pablo Mayor Kathy Chao Rothberg said DTSC’s guidance played a crucial role in completing the project. “We are so grateful,” she said.

“By investing in additional park and recreational opportunities for our residents, the city increases healthy and active youth activities in San Pablo, and we also hope to spearhead transformation of the Rumrill Boulevard corridor, along with an upcoming mobility improvement plan supported by the community.”

DTSC Project Manager Allan Fone, Ph.D., added, “This is a great outcome. The city views this park project as one of the first steps toward revitalizing the site vicinity. This is something for the whole community.” 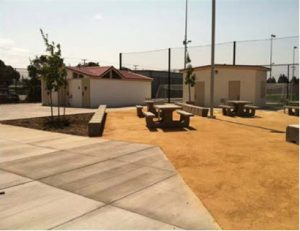 By 1988, it had become vacant and was considered a public health hazard:  The property had drums of hazardous waste, construction debris, sumps with waste water and areas with stained soil.  In 1996, ATSF merged with Burlington Northern Railway to form Burlington Northern & Santa Fe (BSNF) Railway.

In 2003, the City became the owner of the property.  The City signed a voluntary cleanup agreement with DTSC in 2006.  The site investigation was completed in 2012.  Site cleanup consisted of excavating contaminated soil and installation of a cap consisting of clean backfill, artificial turf fields, hardscape and landscaped areas.  The cap ensures that public health is protected by preventing exposure to any remaining contaminated soil.

In helping convert the property from an abandoned lot, which attracted dumping of trash and waste, into soccer fields, DTSC accomplished its primary missions;  turning brownfields green, and protecting public health and the environment.