We are working toward Safer California households, workplaces and products

Play the above to hear the Media Call podcast.

Levels of flame retardants absorbed into women’s breast milk have declined significantly in California since a legislative ban on the chemicals took effect in 2006, according to a new study by the California Department of Toxic Substances Control (DTSC).

The findings, by scientists at DTSC’s Environmental Chemistry Laboratory (ECL) in Berkeley, showed a 39 percent decline of polybrominated diphenyl ethers (PBDEs), common flame retardants found in many household products. Their use in California was phased out under Assembly Bill 302 authored by former Assembly member Wilma Chan in 2003, and since then a dozen other states have instituted similar bans. In 2014, Governor Brown signed Senate Bill 1019, which gives consumers the right to know whether the furniture they buy is loaded with harmful chemicals.

PBDEs were widely used as flame retardants in products such as household furniture, textiles and electronic equipment. These chemicals can migrate out of the products and eventually settle down in dust, contaminating homes and offices and accumulating in people and animals. Health concerns include the potential to disrupt hormonal functions and harm neurodevelopment, possibly affecting learning and behavior in children.

Vulnerable populations, such as pregnant women and children, are still routinely exposed to flame retardants. The DTSC study found that despite declining levels, all breastfed babies were exposed to PBDEs, and 30% of them were exposed to very high levels.

The DTSC study used biomonitoring to assess the effectiveness of the ban in reducing PBDE levels. Biomonitoring is the measurement of chemicals (or their metabolites) in a person’s body fluids or tissues, such as blood or urine. Another recent biomonitoring study found that firefighters are also highly exposed to PBDEs.

To assess the ban’s effectiveness, DTSC examined levels of PBDEs in the breast milk of 66 first-time mothers recruited at the Women’s Health and Birth Center in Santa Rosa between 2009 and 2012 and compared them to levels from another group of 82 first-time mothers from a previous DTSC study conducted in 24 California communities between 2003 and 2005.

The result supports an earlier DTSC finding of a similar PBDE decline in the blood of San Francisco women.

The new findings illustrate the potential benefits of DTSC’s Safer Consumer Products (SCP) regulation that took effect in 2013. Among the aims of the SCP program are the reduction of toxic chemicals in products and the creation of new business opportunities in the emerging safer consumer products economy.

The DTSC study team was led by Research Scientist Weihong Guo. Other ECL scientists involved in the research were Arthur Holden, Sabrina Crispo-Smith, Myrto Petreas and June-Soo Park, in collaboration with Rosanne Gephart, NP, at the Women’s Health and Birth Center in Santa Rosa. Their findings were published in the January 2016 edition of the peer-reviewed scientific journal Chemosphere. Click here to learn more about the research team.

The Environmental Chemistry Labs in Berkeley and Pasadena provide analytical and environmental chemistry support to DTSC’s core programs. With about 50 scientific and administrative staff at its two locations, the labs measure more than 2000 chemicals in a wide variety of samples to support DTSC’s contaminated site cleanups, the enforcement of California’s hazardous materials laws, pollution prevention and green chemistry initiatives, and the California Biomonitoring program. Click here for a list of Frequently Asked Questions (FAQs). 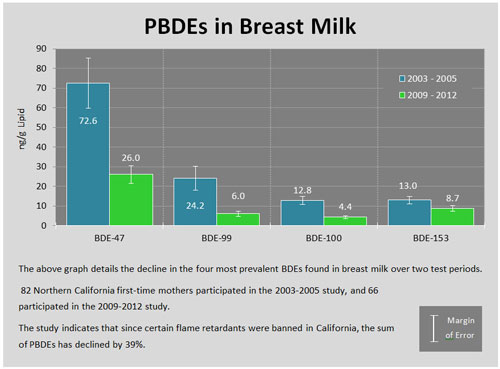 California Healthline
Levels Of Flame Retardant In Breast Milk Are Down