California is mobilizing against unlicensed vehicle dismantling operations, and the Department of Toxic Substances Control (DTSC) is an integral part of this interagency strike team.

Like “chop shop” operators who strip stolen vehicles for quick profits, unlicensed vehicle dismantlers take whatever they can sell and then abandon what remains – including hazardous waste that threatens human health and the environment, often in areas already burdened by other environmental and economic challenges. 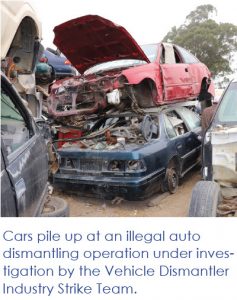 “They’re just a mess – tires and cars piled on top of each other, just junk,” says Chase Paddock, an Investigator in DTSC’s Cypress Regional Office who’s worked with the interagency Vehicle Dismantler Industry Strike Team. “There’s no regard for safety or for the environment. That’s troubling, because you can have families living nearby. If you’re in the neighborhood, you’re going to feel the effects.”

Led by the Department of Motor Vehicles (DMV), the Strike Team combines the resources of seven separate agencies.  Each has unique expertise and enforcement powers. The Department of Tax and Fee Administration, for example, can go after the $100 million in lost sales tax revenue that the State of California Auto Dismantlers Association says its members’ unlicensed competitors dodge each year.

“They’re just a mess … There’s no regard for safety or for the environment. That’s troubling, because you can have families living nearby. If you’re in the neighborhood, you’re going to feel the effects.”

For DTSC, the focus is squarely on the threats to human health and the environment. 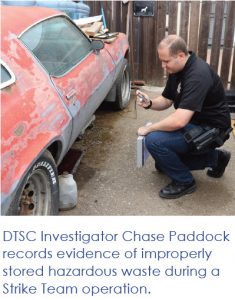 Start with all the gasoline, oil, antifreeze, and brake fluid from the estimated 360,000 vehicles each year. It adds up to some 2 million gallons of toxic liquid – enough to fill three Olympic-size swimming pools. All that gunk has to go somewhere; typically, it gets dumped down drains or into nearby streams, endangering drinking water, groundwater, and ecosystems.

Then there are the vehicle batteries, including both the traditional lead-acid variety and the nickel-hydride and lithium-ion batteries that power hybrid and electric vehicles. Lead and nickel are both toxic and can cause cancer. There are also electrical components with mercury and other dangerous materials, and Freon gas from autos’ air conditioning systems.

Responsible auto dismantlers follow the rules that protect California against those toxic hazards as they legally process some 840,000 end-of-life vehicles each year. Licensed dismantlers register with local and state agencies, obtain a DMV auto dismantler license, pay their fees and taxes, invest in proper equipment and training for their employees, obtain workers’ compensation and other insurance, file required reports, dispose of their wastes responsibly, and contribute to the economy. They provide a needed service to society. 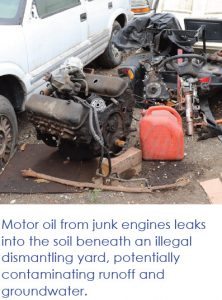