Cleaning up contaminated land and making it productive again is a main goal of the California Department of Toxic Substances Control (DTSC). It is particularly evident in Alameda County, where DTSC has been helping convert former Navy bases and industrial sites into office developments, housing tracts, shopping centers and parks.

The proposed Jean Sweeney Open Space Park is a good example.  The city of Alameda signed a voluntary cleanup agreement with DTSC in 2015 to supervise the cleanup of 22 acres that once housed a railyard and a maintenance building.  Lead and other chemicals lingering from that past life must be cleaned up before the property can become a park.

DTSC has recommended removing 2,500 cubic yards of soil, hauling away 25 truckloads of the most contaminated soil and consolidating the rest, which would contain low amounts of toxic material, on site. It would be placed under a proposed trail. A land use covenant would restrict future use.

The community strongly supported the park project. More than 1,500 Alameda residents provided their input on the design and volunteered their time at this future park, said Amy Wooldridge, the city’s recreation and parks director. “With many natural elements and trails in the heart of an urban, residential neighborhood, this unique park will serve people from Alameda and beyond,” she said.

The proposed park is named after a neighbor who was the catalyst for the project. “It is an interesting story,” said Thomas Price, the DTSC project manager. “A clause in the original purchase agreement back in the ‘20s said that the city had the option to buy it if the railroad ever stopped using it for railroad operations. So the city got a good deal on the land. Jean Sweeney was the one who figured out all the fine print on the original purchase agreement.” 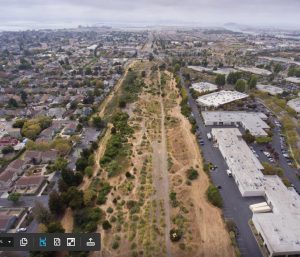 Unfortunately, Sweeney died in 2011 before the park could be built. But her legacy lives on.

The public comment period for the draft removal action plan runs until November 23.  Price said the cleanup could start as early as December. The city hopes to finish the park design this year and start construction soon after.