A collaboration between a Department of Toxic Substances Control (DTSC) environmental scientist and an intern in the El Centro office played a huge role in making an inaugural Earth Day event in El Centro a success.

DTSC’s Abraham Zhan mentored Southwest High School senior Frances Nicklen, 17, in the process of forming a club at the high school called Leaders for Environmental Awareness and Protection (LEAP). The club then spent the year holding fundraisers in preparation for the spring Earth Day celebration at the school.

The event not only provided a tremendous resource to the community for learning about environmental issues in the Imperial Valley, it also created an opportunity for Nicklen and other Southwest High School students to learn planning and producing a community event, Zhan said.

“We wanted to create a club that helped establish leadership in students through environmental topics,” Zhan said about the club that focuses on the environmental issues Imperial County faces. “This event was almost entirely put on by the students. I wanted them to learn how to plan, set up, and run an event.” 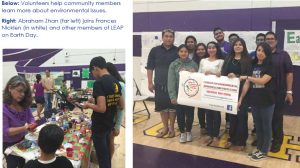 Zhan, who has been with DTSC since late 2014, is also chairman of the Imperial Valley Environmental Justice Task Force. He wanted to do something in his spare time to help local students develop leadership skills and when he met Nicklen he saw in her someone who had the, “…motivation, drive, and interest in participating and leading the pilot program at Southwest.”

Zhan was impressed with how Nicklen and club members worked together to produce the Earth Day event at the high School.

“I think they did an excellent job this year,” Zhan said. “They did the fundraising from scratch and were able to put on this large event. They filled the itinerary with activities from a wide range of groups (student and community), handled publicity, and obtained donations and sponsors for the event in addition to fundraising. We want this to be an annual event.”

The three-hour, afternoon event in the school gymnasium featured 13 booths and was attended by nearly 50 people from the community. The club gave the kids a chance to get involved in the community.

“There was definitely a pretty large learning curve,” Zhan said. “There are not that many opportunities for students to do something like this … and in general not much outreach to the community.”

Nicklen agreed that she and her fellow club members worked very hard in preparation for Saturday.

“We had to organize everybody, get them to agree to come and set up a table. We let the media know and the (Imperial Valley) Press came out and they interviewed a few of us,” Nicklen said. “And just trying to get the word out to everybody … We had a lot of activities for kids and everything was related to Earth Day … We are excited about it.”

It was a lot of hard work, but Nicklen was very pleased with the club and the event.

“Because it’s our first year, it’s been kind of difficult to get things together,” Nicklen said. “There were a lot of hoops to jump through. We didn’t have any funds so we focused a lot of fundraising so that we could have this event at the end of the year. This was like our final goal, our final project.”