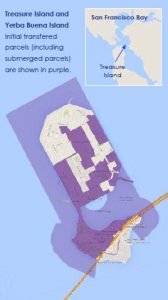 The U.S. Navy conveyed about  310 acres on the islands (including 222 acres on Treasure Island and 88.5 acres on Yerb Buena Island) and  507 acres of submerged land surrounding the islands to the city on May 29, 2015. In a press release, Mayor Edwin Lee called it, “…A major milestone in the redevelopment and revitalization of Treasure Island.  ..We’re eager to transform this former naval base into a vibrant community. “

The transfer included structures and land that the Navy had cleaned up by removing toxic chemicals that were a legacy of its military use.  In an area at Yerba Buena, lead-contaminated soil was removed and disposed off-site.  The California Department of Toxic Substances Control (DTSC) imposed a land-use covenant for the remaining lead-contaminated soil under buildings and hardscape. The covenant details the procedures that must be followed if the  buildings and hardscapes are removed.

More land transfers will occur over the next several years as  redevelopment progresses.