The Department of Toxic Substances Control is part of an interagency team that is seeking the public’s help to crack down on unlicensed vehicle dismantlers. Operating in urban, industrial, and rural areas alike, these scavengers threaten public health and the environment as they strip possibly dangerous and defective parts from motor vehicles for sale or reuse and dump hazardous wastes into the environment. 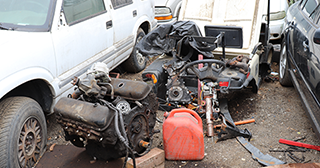 DTSC’s Role in the Strike Team

DTSC investigators are participating in the interagency Vehicle Dismantler Industry Strike Team. Poised to act throughout the state, the Strike Team is investigating suspected unlicensed dismantling operations, assessing the health risks and environmental damage they pose, and cracking down on tax dodgers who seek to benefit from their illicit activities. As authorized by Assembly Bill 1858 (Santiago, Statutes of 2017) and signed by Governor Brown, seven state agencies are pooling resources and expertise to combat unlicensed vehicle dismantling. They include:

DTSC Success Story:  Scavengers Who Junk Cars for Profit Are in State’s Crosshairs reports on the Strike Team in action.

How to Report Dismantler Activity

Anyone who suspects a person or business may be dismantling motor vehicles without a license can report their concerns using the California Department of Motor Vehicles online complaint form.

According to the Department of Motor Vehicles, an estimated 1.2 million vehicles are disposed of each year across the state. Of those 1.2 million, some 360,000 vehicles wind up in the hands of unlicensed chop shops. Unfortunately, these operators ignore environmental, insurance, tax and workplace safety regulations.

Learn about the application requirements for dismantler license here.

What is a Metal Shredding Facility?

California law defines a metal shredding facility as an operation that uses a shredding technique to process end-of-life vehicles and other metal-based products like appliances. These facilities separate and sort ferrous metals, nonferrous metals, and other recyclable materials from non-recyclable materials. For a map of major auto shredders and metal recyclers in California, click here.

To learn about the application requirements for a dismantler license, go here. 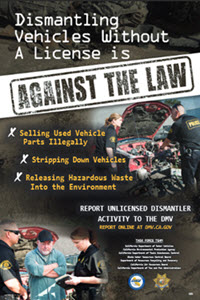 Help spread the word that unlicensed vehicle dismantling activity is against the law.

In the wrong hands, end-of-life vehicles pose a serious public health threat when their components are not properly disposed.

Each year, about 2 million gallons of toxic materials from gasoline, oil, antifreeze and other liquids from these vehicles can end up in the wrong place.

In some cases, the fluids get dumped in neighborhood drains or nearby streams, increasing the likelihood of contamination of a community’s drinking water, groundwater and the ecosystem. Additional hazards include vehicle batteries, electrical components with mercury and other dangerous materials, like Freon gas from air conditioning systems.